Since it happens time and time again, it's obviously not an accident that Laurie Morvan has a pretty good track record getting recognition of her releases. In 2008, the year the Laurie Morvan Band made it to the finals at the International Blues Challenge, the band's "Cures What Ails Ya" CD was a finalist for the Blues Foundation's Best Self Produced CD award.  Then in 2010, with their very next release titled "Fire It Up," the band not only got another nod but they took home the gold as well.  Fat chance of that happening again, right? Wrong! In 2012 "Breathe Deep," got them their third consecutive nomination making it all the way to the semifinals.  That's quite a nice run.

Now Laurie is back with her sixth release - "Gravity" - and the fact that she's teamed up with one of the best producers in the genre, along with some of the best musicians in it as well, it wouldn't surprise me if there was a different Blues Foundation award in her future.

On "Gravity," playing all guitars, singing all lead vocals and writer of all of the twelve tracks, Laurie Morvan is joined by: Mike Finnigan on B3 organ; Jim Pugh on B3 organ, Wurlitzer and piano; Barry Goldberg on piano; Bob Glaub on bass; the disc's producer, Tony Braunagel on drums and percussion; and Lisa Morvan, Maxayn Lewis, Kudisan Kai, Leslie Smith and Ricky Nelson on background vocals.

The opening track is titled "My Moderation" and with its catchy chorus line of "my moderation needs some moderation," Laurie has obviously decided that the phrase everything in moderation includes moderation itself.  Like most of what you're going to hear on "Gravity," this one is a smoker.  With Laurie and Mike going toe to toe on the guitar and organ and Tony and Bob rockin' the rhythm on drums and bass, there's no relenting here.

"Money Talks," is a cleverly written track.  You see, although money talks, Laurie can't seem to get into a conversation with hers because it waves bye-bye.  Due to lots of scorching blues guitar licks, for my particular taste this one features some of Laurie's best guitar work.  Add in some fancy tickling of the ivories by Barry; Tony and Mike - the dynamic duo of the blues - doing their usual exceptional work on the drums and organ; and very well sung, energetic lead and background vocals and this one's another winner.

The chorus line on this one contains some of the most poignant lyrics I've heard in sometime: "It's backed up on easy street for a long while, but there ain't no traffic on 'The Extra Mile.'" Ain't that the truth.  At the risk of dissing the band (they really do have a lot going on here), Laurie pretty much takes this rocker and runs with it.  Powerful lyrics being powerfully sung while putting on an equally powerful guitar performance.  Nice job Laur!

"The Man Who Left Me" was the first man I ever loved
He put the sun in the sky and the stars above.
I thought he loved me but I learned to live with tears
When he walked right out that door after five years.

Nothing I could have said about those emotional and melancholic lyrics would have come across as worthy so I just had Laurie say them for me.  The eerie effect created by the masterful rhythm and percussion are the perfect backdrop for the the songs dark subject matter.  All that, added to a hymnal like lead and background vocal presentation give this one "song of the year" credentials.

This is one of those songs where after you hear the story it tells you find yourself hoping it wasn't written from a real life experience but in actuality, you can't help but feel that it was.  It's about a woman in a totally wrong relationship and she's having a rough time figuring out if she's tough as nails or just "Too Dumb To Quit."   On top of singing her heart out, between the pedals and the guitar slide Laurie puts on another masterful performance on the guitar.  With the keyboards being an essential part of all twelve tracks, I gotta get a plug in for the monster job Jim Pugh's doing with them on this one.

Other tracks on "Gravity," include: "Twice The Trouble," "Stay With Me," "Gravity," "Dance In The Rain," "Gotta Dig Deep," "Shake Your Tailfeathers,"
and "I Want Answers."

If you haven't yet received a copy of "Gravity" for airplay, please contact Betsie Brown at www.blindraccoon.com and to find out more about Laurie Morvan, just go to www.LaurieMorvan.com.  Whomever you contact, please tell them their friend the Blewzzman sent you. 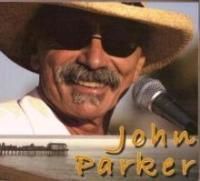 JOHN PARKER has always written songs that are funny and true to his personal life. Suffering from liver cancer, his music became his medicine - it gave him his happiness and kept him going for several years. The finishing touches were put on this "Self-Titled" CD just days before he passed away. None of the music he ever wrote was more personal than the songs that appear on this disc. As I listened to them, it became quite clear to me that I was listening to a man who knew his fate, accepted it and actually used it in a positive way. On one of the tracks, JOHN says that if he ever had a chance to live his life over again, the only thing he'd change was that he'd "Find a cure for the blues". If you ask me, I believe he already had.

JOHN PARKER may be known as the "The Rockin' Bluesman", but make no mistake about it - his music is not Blues Rock, it is the Blues. I guess the association with "Rockin" comes from the claim that his music will "make you leave your seat and get up on your dancin' feet." So let's start dancin'.

It sounds like some of the lyrics on the opening track may have come to JOHN while watching a TV commercial. "No money down, easy pay, divorce / bankrupt / bad credit OK - same day financing - drive it away". All of that obviously made it easy for him to say "I GOT ME A NEW CAR". This one featured great guitar work from John and exceptional rhythm from Bill & Chris on the bass and drums.

"I AIN'T GONNA GIVE UP" was obviously more than the title of this song - it was JOHN'S belief. This track pretty much tells his story and in doing so offers some pretty encouraging advice as well. Musically it's one of the discs best. JOHN'S smokin' it on guitar, NATE'S great on the Pedal Steel and the rest of the band's jammin' out. Real good stuff.

JOHN'S realism makes it easy for him to say he's going to "FORGET ALL HIS FEARS". This, one of the few slower tracks, features more amazing real life lyrics, great lead and backup vocals, soft piano and organ work from STEVE and great blues guitar licks from JOHN.

"I'VE GOT THE BLUES" is a smoker. C'mon, would you expect anything less with a title like that? This one features some of JOHN'S best guitar work and some real hot piano blues from Steve. As on most tracks, the rhythm sections at it's peak. More good stuff right here.

With the rest of the band in a real soft groove behind him, "HOPELESS ROMANCE" is all about the man, his vocals, his guitar, his thoughts and his emotions. This is JOHN PARKER at his best. I dare you to not hit replay at the end of this one.

There's nothing worse than having the blues "EARLY IN THE MORNING", as this track will attest. On the other hand, if ya gotta get up early in the morning, this one will have you doin' a calypso before you even have your coffee. Great percussion and backup vocals highlight this Island sounding tune.

"I'LL NEVER BE FREE" is definitely one of the songs they were talking about when they said JOHN PARKER'S music will make you leave your seat and get up on your dancin' feet. However, to this one, you'll be doin' a lot more swaying than rockin'. What an absolutely beautiful and relaxing song. JOHN'S vocals and STEVE'S keyboards will surely sweep you away. Although there is more, this appears to be the most fitting song to close with.

Other tracks on this remarkable disc include: "THE PRICE OF FAME", "LOVE'S GONNA FIND YOU", "MY VALENTINE", "QUEEN OF THE DAMNED" and 'WAITIN' FOR THE WATER TO RISE".

I know I close out all of my reviews stating how much I loved what I just listened to and wrote about, and I always recommend you grab a copy for your collection, and that's because I choose my reviews. Having said that, if you've never listened to that advice before, do yourself a real favor and take heed....even if it's the first and last time you do. This may very well be the most interesting CD I've heard all year.

Please check out JOHN PARKER'S web site by going to his website at
www.JohnParkerBlues.com- and you won't have to tell him the Blewzzman sent ya..... I have a feeling he already knows that.